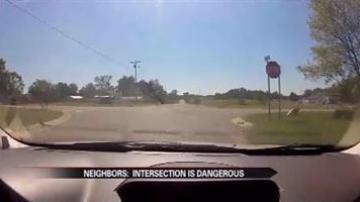 HOWARD TOWNSHIP, Mich. – Neighbors are questioning the safety of an intersection where two children lost their lives after a car accident.

The accident happened at M-60 and Leet Road on Tuesday.

On Wednesday some people who live nearby said they think something needs to be done on the roadway.

"I would hope that they would put a 4-way stop light here because this is not the first accident there’s been a couple accidents here," said Carl Roth.

Some told ABC 57 that there are trees blocking the view of the stop sign while traveling south on Leet Road.

Others said once you reach the stop sign the view of the M-60 traffic is blocked, which makes it difficult to see cars coming.

ABC 57 decided to look up the police reports from previous crashes.

From 2004 to 2011 there were seven crashes reported at the intersection.

"Of those seven crashes only one appears to be related to the intersection itself the others appear to be car deer crashes or weather conditions," said Nick Schirripa with Michigan Department of Transportation.

Schirripa said there doesn’t appear to be any crash pattern at the intersection.

He said the department hasn’t received any formal complaints about the area, and that there is no plan to make any changes.