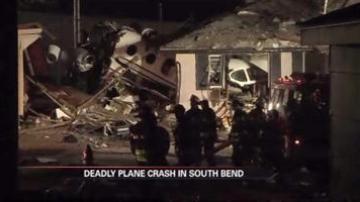 SOUTH BEND, Ind. — Neighbors near the site of the deadly plane crash reported hearing the plane as it crashed to the ground.

A woman who lived in one of the homes struck by the plane was shaken up and said she was thankful that she and her son made it out alive.

Another neighbor reported hearing the plane crash into his home.

"I heard a dull thud and I went out to the living and I could see the sky," said Frank Sojka.

That hole in Sojka's house was from the plane that was trying to land at the South Bend Regional Airport when it had a mechanical issue and crashed right through Sojka's home. Two other houses then caught fire.

"About thirty seconds later, I heard fire trucks," said Lindsay Van Vleet. "I said to my husband, I think a plane just crashed and sure enough it gone through three houses."

According to police, the pilot and co-pilot of the plane died instantly. Two people from the plane and one on the ground were taken to the hospital.

The crash also caused a gas leak and the entire neighborhood had to be evacuated.

Now all neighbors can do is wait until crews finish up and they can return home.

"Prayers go out to the families. The neighbors. The people in the plane. I can only imagine what they are going through right now," said Van Vleet.

Investigators said it could take days or weeks until this investigation is complete.