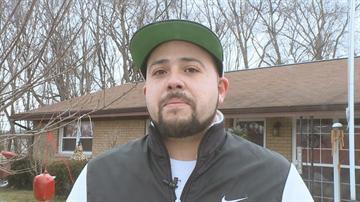 ST. JOSEPH COUNTY, IND. --  Guillermo Mendez says he did not know what to think when he saw a swarm of police behind him on Wedgewood Drive.

"I was just pulling in coming back home and all i saw was all these cops flying down the road and just trying to get this guy out of the car..all i heard was gunshots", said neighbor Guillermo Mendez.

Mendez says he was so scared, he drove right past his house and took off, and he was not the only one on edge.

"So far this area has been pretty lucky until today", said neighbor Debbie McKay.

Neighbor Debbie McKay says she knows crime is common in St. Joseph County, but she did not think it would reach her street.

"I feel very terrible..i want to know what is going on..this is a quiet neighborhood and now we have this going on", said McKay.

Both neighbors say they never expected it to end with an officer being cut and a man being shot.

"I seen somebody laying out there", said McKay.
"Everything just happened so fast it was just crazy", said Mendez.