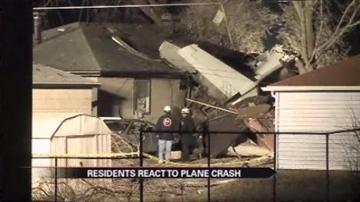 SOUTH BEND, Ind. --  Just a day after the plane crash that shook South Bend, some on North Iowa Street were allowed to return home.

“Then she replied back and said an airplane crashed on our street and to call her back,” said Dakota Goodman.

Goodman and his mom, Lesa Brown, say they are relieved that the jet that went down last night did not hit their home.

“It is kind of scary actually.  It is just a few houses down from us that could have been us,” said Lesa Brown.

But they say going back after being evacuated overnight has not been an easy transition.

“It has been a real pain,” said Brown.

People are not allowed to park on Iowa Street and police are only allowing people on the street that are on their list of residents.

“He said she had to walk all the way up Ryer Street to somebody who had a list so she was not a happy camper,” said Brown.

It’s proved to have been an uneasy day as they settle back in with the crash on their minds.

“I am nervous,” said Brown.

But as bad as their nerves are, the Brown family plans on staying put.

“This is home. We are not going anywhere,” said Brown.