Neighbors speak out against expansion of Mishawaka Riverwalk 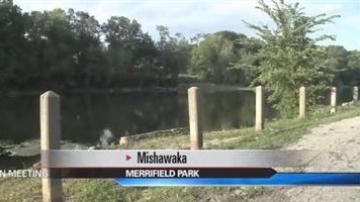 MISHAWAKA, Ind. --  “They do not need to put riverwalks in when they have perfectly good sidewalks to walk on,” said Prospect Drive neighbor Laurie Dye.

Neighbors who met at Merrifield Park Wednesday were up in arms about a plan to put a riverwalk right through their homes on Prospect Drive.

But Mayor David Wood calmed their fears when he told them currently, no such plan exists.

“There have been no discussions to expand the river walk into this neighborhood at this time,” said Wood.

He said the whole thing was a miscommunication stemming from a few properties the city bought on Prospect Drive.

“Those we actually did acquire as part of park improvements we are doing here,” said Wood.

However Wood did say expanding the riverwalk onto Prospect Drive is part of a previously made plan.

“We do have a master plan in place long term and we have been throwing some dates around,” said Wood.

Wood said if this master plan was put into place, the Prospect Drive portion would not be put into effect until 10-15 years from now.

Dye said she does not ever want a riverwalk in front of her house for fear of foot traffic among other problems.

“Our property values would go down, because that is a big selling point, having the beautiful view of the river and wildlife,” said Dye.

Dye also said she would rather see the money be put towards something that is a need not a want.

“That money could go for something that is really needed like maybe the school system.”