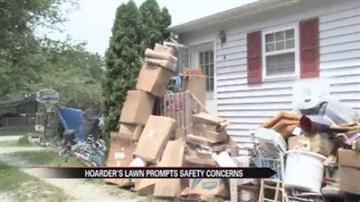 NORTH LIBERTY, Ind. -- A crowded front lawn in North Liberty has neighbors concerned for their safety. A resident on North Washington Street says she feels like she has a landfill in her front yard.

Jamie Filley says it's one thing to have a lot of stuff, but there comes a point where it's a hazard.

"At one point it was pretty much all the way up to my deck, on the other side and now it's approaching this deck,” said Filley.

Her back apartment is connected to Michael Goble's front apartment.

She says none of the junk is hers.

"I have to park in back because he's pretty much taken over everything,” said Filley.

She says it has taken over the front yard, the side yard, and the other side yard.

She says the junk poses a safety hazard for her one year old son.

"When it comes to the safety of my son, that's it! I've had it at this point,” said Filley.

She's throwing her son's first birthday party at home. She is worried the party won’t be about Austin, but will focus on all the junk.

He removed some items at her request – saw blades.

"I said, ‘I'm just going to let you know I have a two-year-old nephew and my son and if they're out here playing and they get hurt on your rusty saw blades you have hanging up, you're going to have a heck of a lawsuit on your hands,’” said Filley.

Michael Goble spoke off-camera. He says he doesn't want anything bad to happen to the little kids, but everything in his yard is legal.

A judge is set to decide what happens to Goble’s belongings at a hearing on June 25th.

The judge will rule on whether or not Goble is in contempt of court for not removing all his stuff as previously ordered.