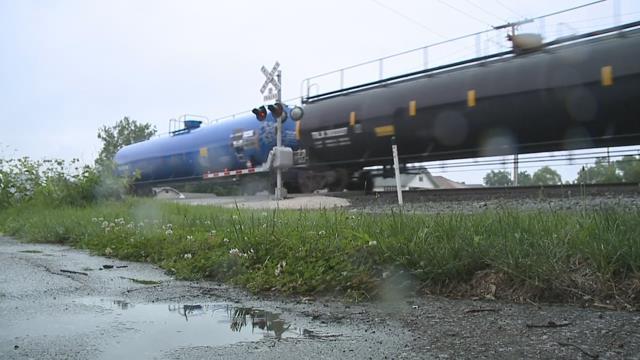 In two months there have been five fatal train accidents involving pedestrians in South Bend and Mishawaka.

They are tired of seeing police, yellow tape, and makeshift memorials for pedestrians, like Elijah Brooks, who was struck and killed by a train on Saturday.

At the railroad crossing on Caroline Street in South Bend, there are no signs or markers warning pedestrians of a safe distance to keep between themselves and passing trains.

Norfolk Southern said installing signs hasn't proven to be a successful solution when reducing these types of instances.

“Unfortunately signs and fencing does not completely solve the problem. What we need is advocates in the communities in which we operate, like South Bend, to get the word out that it is not safe to trespass on railroad property,”  said Dave Pidgeon, Public Relations for Norfolk Southern.

In 2014, Indiana ranked 13th overall in rail trespassing causalities, with 10 deaths and 11 injuries.

“It's important for folks in South Bend to understand that railroad property is private property and if you see tracks you should stay back. It's not worth trying to walk along the tracks or to cut across them,” Pidgeon said.

He said trains moving at a speed of 40 miles per hour or faster need at least one mile to complete a stop.

But neighbors said there are other improvements the rail line could make.

“Like a ding or something when the gates are going down,” Weidman suggested.

Currently, the gates go down but there is no bell or audible warning of an inbound train.

“It is not the railroad's decision as to what sort of warning devices will go into those individual crossings. That is actually up to the state,” Pidgeon said.

ABC57 News reached out to the Indiana Department of Transportation. A representative there said the department is not responsible.

They said warning devices are the responsibility of whatever city the crossing is in.

We reached out to the city of South Bend and have yet to hear back.
Share this article: