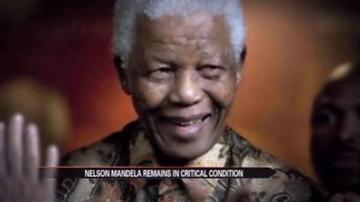 AFRICA -- Nelson Mandela remains in critical but stable condition in the hospital Thursday.

Family members and even the current South African President held a vigil.

President Jacob Zuma canceled his scheduled trip to be close to Mandela, who has been in intensive care for 20 days.

President Obama is in the middle of his African tour. He is scheduled to be in South Africa Friday.

"I think he is a hero for the world. If and when he passes from this place, one thing I think we will all know is that his legacy is one that will linger on throughout the ages," said President Obama.

All eyes remain on President Zuma. When the time comes he will be the one to make the announcement to the nation that Mandela has died.