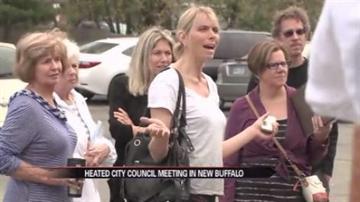 NEW BUFFALO, MI -- A political controversy continues in the small city of New Buffalo as a special City Council meeting was held to replace one of the two council members who recently resigned.

We first told you about the on going controversy on Wednesday.

Dozens of citizens showed up at City Hall Saturday for the special meeting to voice their concerns but were quite frustrated after the meeting wrapped up in ten minutes.

Many say they are upset that the board voted on their own vacancy Saturday, when less than two weeks ago they decided by vote who would fill another position.

In Saturday's meeting the three member council appointed Charles Krametbauer to serve the remainder of Susan Maroko's council spot that continues until May 2014.

According to board member Ray Lawson, Maroko resigned via email. ABC 57 left a message for Maroko for comment, but she did not return our phone calls.

The agenda for Saturday's special meeting contained eight different items, however the meeting was over by 9:12 a.m.

Many citizens who showed up were frustrated that they were not allowed to sign up to make a public comment. Instead dozens gathered outside of city hall waiting for council members to exit the building to give them a piece of their mind.

When Mayor Peterson walked out many started booing and one man yelled, "There he is... responsible leadership Warren, way to be a manager Warren!"

Donna Messinger a New Buffalo resident said, "They had all these agenda items, but I pretty much think the agenda was made up because the meeting was over as soon as they appointed who they decided they wanted to have on city council."

The parking lot turned into a place where city residents voiced their frustrations with what they call a "good ole' boy" council that wanted to select a candidate that has their own agenda in mind.

Peterson, the city's Mayor and lead council member got to vote on the candidate although Tuesday he will step down and Pete Weber will be sworn in to his council spot. A decision the voters made earlier this month in a city wide election.

Pete Weber said, "Local government here has even gotten less respect from its constituents than it had before."

Weber was upset he was not able to vote on a candidate that will serve on the board along side of him, plus at the lack of communication on how the candidate was chosen.

Weber said, "You know yes, their names were put into the hat, but no one was contacted, they weren't met with, there was no interview."

ABC 57 caught up with council member Ray Lawson to find out how many citizens put in for the council seat as he was leaving the meeting he said, "Six. I believe there were six."

Lawson wasn't clear on the selection process or  how they came about selecting Krametbauer.

Some of the voters think the board will try to appoint Peterson on Tuesday to another vacancy the city council has to fill. This vacancy was created when Rich Shoemaker recently resigned.

ABC 57 attempted to reach Shoemaker for comment to find out why he resigned, however he didn't return our phone calls.

Lawson said, "Where these folks are coming up with the idea that Mr. Peterson was going to be reappointed I don't understand."

Messinger said, "I don't believe that- I think that's the reason they have the special meeting today, to get him appointed. They want him back on there so it's weighed in their favor."

Weber said, "You did have one good thing today that was a positive- you had an entire community come forward, come together and voice their in this case opposition- but you had unity."

Weber will be sworn in on Tuesday.