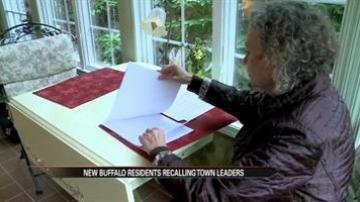 NEW BUFFALO, Mich. -- A New Buffalo resident has filed a petition to have the mayor and mayor pro tem recalled from office. She says the two have violated both ethics and moral codes.

"Someone who has laid carpet all their life may be a very intelligent person, but they don't have the education that is required for this type of position," said Susan Gotfired.

Some New Buffalo residents aren't happy with how their city is being run.

"All you have to do is look at our downtown and you'll know we haven't progressed any," said Gotfried.

Now they're doing something about it.

"We're either stuck with them a long time or we recall them," said Gotfried.

She wants to have them recalled because she says the council has been making hiring decisions that are questionable.

"Although Migs Murray kept saying it was legal, it violated their code of ethics," said Gotfried.

The Berrien County Elections Commission will decide whether the petition to recall the two city leaders can force a recall election.