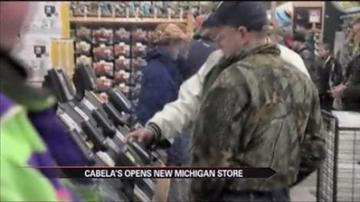 SAGINAW, Mich. -- A popular outdoor chain added a new store in Michigan. The new Cabelas opened this week in Saginaw.

The store is known for its hunting gear and aquariums. Dozens were waiting outside when the doors opened, and the line continued throughout the day.

Besides being a big tourist attraction, the store added 100 jobs to the local economy.

"We hope the presence of the store and the jobs created boosts the economy and the community," said Wes Remmer, the communications director. "People come to shop in this area already. We hope to add to the draw. Everybody wins."

Before now, the only Cabelas in Michigan was near Ann Arbor. Another store is expected to open next month outside Grand Rapids.