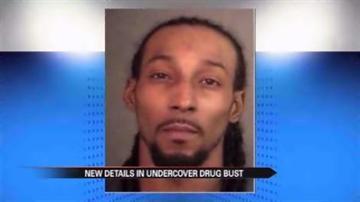 It happened at the corner of Mayflower Road and Western Avenue at the popular family-owned restaurant, Top Notch Restaurant and Bakery.

According to court documents, Walter Wilbourn, 34, has a lengthy criminal past and even served time for possession of cocaine.

According to investigators, Wilbourn met undercover officers inside Top Notch Restaurant and Bakery.

Police say Wilbourn planned to buy 1.5 kilos of cocaine from officers for $55,000. When Wilbourn pulled out two black bags full of cash, police surrounded him.

That is when police say Wilbourn jumped in his car and started ramming into squad cars. Then, he tried running over two officers who had reacted by drawing their guns.

The owner of the restaurant had no idea an undercover sting was happening in his parking lot and he told ABC 57, off camera, he is not too happy about his family restaurant turning into a crime scene.

Luckily, no one was injured. Officers fire several shots into the hood of Wilbourn’s car before he backed his car through a fence and got stuck.

A search warrant of Wilbourn’s house revealed he had packing material, residue of white powder and scales in his home.