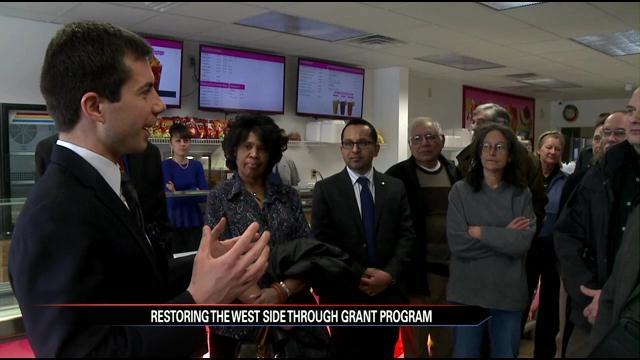 In an effort to beautify the city of South Bend, the Urban Enterprise Association of South Bend has created a matching grant program to help small businesses renovate their store fronts.

The grants are being offered to businesses along Western Avenue, between William Street and Mayflower Road, and Lincolnway West, between LaSalle Avenue and the west city limits.

Located on Western Avenue, La Rosita is seeking the city's help to fund much needed renovations to its exterior.

The ice cream shop used its own money to pay for renovations inside.

“We like where we're at. This is where we first started. And we see the potential it has and we don't want to leave it,” said La Rosita Co-owner Juan Cervara.

Businesses along Lincolnway West and Western Avenue can now apply for the grant, which will provide owners with up to $25,000 for exterior improvements.

“What's going to be exciting over the next six months is going to be the business improvements. The city has come up with grant money to help businesses improve the look of their space. And that's going to be great and inviting more people to come down to the west side,” La Casa Executive Director Sam Centellas said.

They are confident this money will help keep loyal customers and attract new customers as well.

“The fact that the city is reaching out to us tells us something. They recognize there is potential here. Huge economic potential,” Cervera explained.

“Generally that interest would take a whole year and we've seen it in the last month. There's a lot of enthusiasm on the corridors,” Divita said.

In addition to this matching grant, city leaders said residents will soon see other improvements to these west corridors.

The street will become three lanes to allow street parking for small businesses.

The city will begin to repair sidewalks and plant trees.

Similar improvements will begin on Western by late summer or early fall.

Funds are allotted on a first come, first served basis. Those who are given the grants will be reimbursed for up to 50 percent of the cost of facade and streetscape improvements.

The deadline to apply for this grant is October 12th.