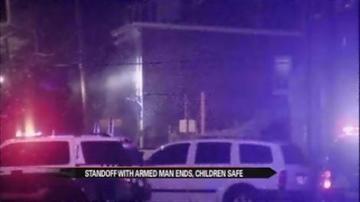 TRENTON, N.J. -- A three day standoff with an armed man inside a New Jersey home is now over.

Police say the man accused of killing two people and holding the children hostage was shot and killed.

The man was identified as 38-year-old Gerald Murphy.

Murphy is accused of killing a woman and her 13-year old son.

Witnesses said the scene sounded like something out of a movie.

"The best way I can describe it, it sounded like a movie. I've never seen nothing like this in my life," said Dion Robinson.

Police first noticed the smell of human decomposition and found Murphy armed with a gun.

Police say the welfare of those three children was the most important during the standoff.