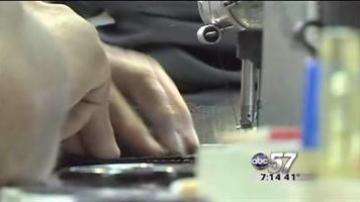 Wieland furiture design company supplies furniture products to companies all over the nation and pretty soon they will be supplying one-hundred and twenty jobs to the Goshen community.

"Right now we are looking to add thirty-five to forty positions.  Over the next two years we approximate around one-hundred and twenty positions", said H.R. Wieland President Steven Yoder.

Steven Yoder says Wieland Design was affected by the recession.

"Goshen was hit hard and a lot of big businesses were downsizing, including us. We downsized significantly", said Yoder.

Yoder thinks Wieland's expansion indicates the economy is turning around in Goshen.

Elkhart County Chamber of Commerce Vice President Kyle Hannon agrees that the economy is starting to improve.  He says he has been seeing expansion projects pop up all over.

"Lately they have been adding a lot of expansion projects and that is good news to this area.  I think we are all happy about that", said Hannon.

Wieland is offering jobs in everything from sewing machine operators to assembly workers.

"People come in and continue to grow their skillsets, and Goshen is a good solid community to do that in", said Yoder.

Yoder says he can't think of a better town with better people to give the jobs to than Goshen.