New Lincoln Way West to open in a few days 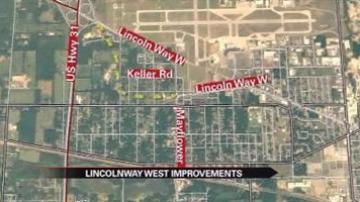 SAINT JOSEPH COUNTY, Ind.-- Construction near the South Bend Regional Airport is coming to an end.

On Wednesday, ABC57 got an exclusive look behind the cones at how the new Lincoln Way West is taking shape.

It's a $4 million project that started with the South Bend Regional Airport expanding a runway. But, the finish line is only a month away and some of the upgrades will be open in just a few days.

It's been six years since Lincoln Way West was a straight shot.

"Right now we've got traffic switched over to the west bound lanes of US 20. We've got one lane each direction," explained Larry Simpson, a manager on the construction project.

The traffic filters south into Mayflower Road where drivers have to then go through a roundabout and make a sharp left to get back on U.S. 20. But in about a week, that will all change.

"This is phase two, this is the tie in now-Lincoln Way all the way from the airport  or Lexington, all the way out to 20," explained Simpson.

At the Mayflower roundabout, drivers will actually be able to go straight through and continue on Lincoln Way west and connect to U.S. 20 at the U.S. 31 interchange. But, there will be a few restrictions.

"It will be two lanes running here,"explained Simpson as he showed us a diagram of the eventual finished project. "Once [Lincoln Way] gets to Keller road, it will throttle down to one lane on the eastbound lanes and we'll have one lane each way here (indicating the stretch of Lincoln Way between Keller Road and U.S. 20) and then two lanes of traffic here (indicating to the stretch southeast of Keller Road."

The new Lincoln Way highway is more direct and faster. The highway will be two lanes in either direction separated by a grass median.

The highway will also be lined with street lights and a walking path that begins at Oak Road which is now a cul-de-sac.

But, aside from the convenience of the new Lincoln Way, Simpson said it will also be safer.

"You're going to have two lanes each way now, it will be a lot safer rather than throttling down to one lane like you have now on Mayflower."

The new Lincoln Way is expected to open up at the end of next week or early in the following week.

However, there are still several pieces of the project that need to be completed before the entire construction can be considered complete.

"The existing north lanes of the existing U.S. 20 out here will be removed and we'll only have one lane traffic- one lane in each direction on Mayflower to a cul-de-sac and you'll come back to the roundabout."

Mayflower Road will be barricaded when Lincoln Way west opens up and it will no longer cut through to U.S. 20.

Also, crews need to finish constructing the west bound lanes that will tie into U.S. 20 before the full four lanes of traffic on Lincoln Way can open up.