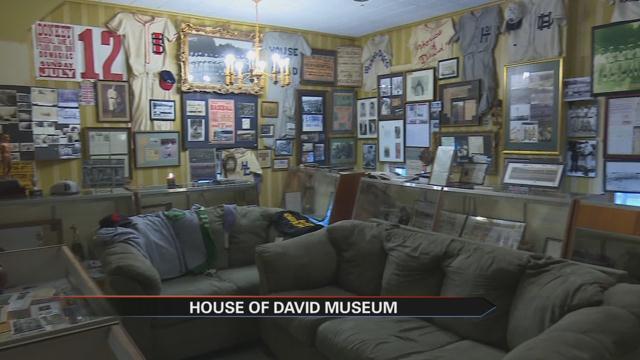 Nearly 30,000 pieces of Berrien County history are on display in a new museum opening this weekend in St. Joe.

The history of a Benton Harbor religious group is being brought back to life in a home-turned-museum on Main Street in St. Joe.

“[Visitors] will learn about super-early baseball, from the teens all the way through the [19]50s,” Siriano said. “[They’ll also learn] how the House of David helped break the color barrier in baseball; early amusement parks in America; steam engine trains; about some of the most scholarly people on the planet and what they did right in Benton Harbor to make a difference.”

The museum is a one-stop-shop for Berrien County history buffs.

Siriano created the first version of the museum back in 1997.

As he moved throughout Berrien County and briefly across Michigan, the museum followed him. But this past June, he purchased the house on Main Street in St. Joe and transformed it into the fifth edition of the House of David Museum.

“The more I collected and the more I learned about the story and how broad it was, the more fascinated I became,” Siriano said. “[I] basically just made a decision that that’s what I wanted to do, is acquire enough to open a museum and tell the story.”

Siriano has traveled the world in search of House of David artifacts; even handing out “Wanted” posters for items while traveling with his daughter.

He now has nearly 30,000 items on display in his museum – an additional 80,000+ items had been in his original collection, but he sold that chunk to a college in upstate New York, where they currently sit on display.

In the new museum, an entire room is dedicated to the House of David’s renowned baseball team that broke racial barriers and hosted the likes of Babe Ruth.

There are also documents on display showing how Siriano connected a family in England with their ancestors who had survived the sinking of the Titanic and completed their journey to join the Benton Harbor-based religious group.

“I just feel like it’s important to keep teaching this story because it’s worthy of having its place in history,” Siriano said.

There’s a vintage ride-on train in the museum, along with some original rides from the old Silver Beach Amusement Park.

“It’s absolutely my life passion,” Siriano said of the museum.

Group tours can also be scheduled by appointment.

Admission is free; and there is a donation box at the front door.