New program tries to end the cycle of violence 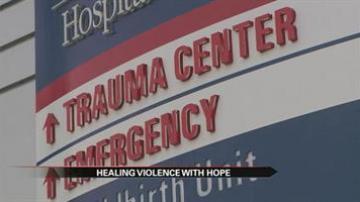 SOUTH BEND, Ind. -- A new program in South Bend aims to curb some of the hostility facing trauma victims and their families. After a victim is treated for a gunshot or stab wound, social workers are called in to provide counseling to the victim in hopes of preventing retaliation and further violence once they leave the hospital.

In South Bend, police lights come and go but the problems that brought them there in the first place linger long after the crime has been committed.

"They have to want to change," said Bonnie Strycker, Executive Director of Youth Service Bureau.

A change that Strycker and others at the Youth Service Bureau are determined to make happen.

They have expanded their outreach beyond the streets and have taken it into memorial hospital.

"It's also a way of reducing the potential for retaliatory violence," said Strycker.

The program is called Healing Violence with Hope.

Once a trauma victim is taken to the hospital, doctors and social workers meet with them.

"When a child or an adult is faced with violence and trauma, they have a choice. They can fight or they can flight," said Dr. Margo DeMont of Memorial Community Health Enhancement.

DeMont says there's more than just one choice, but in order to get a victim to see that they have to teach them to think differently.

That starts in the emergency room where they attempt to reconfigure the person's neurological network.

Given the recent violence in South Bend, there's an incentive to get more people involved.

Only three victims have signed up since the program's inception last fall, but welfare workers are quick to point out it's a huge step towards curbing violence in the city.

"Three people may not seem like a lot, but the ripple effect in terms of the response from the community just goes on, and on, and on," said Strycker.

So far thirty people within the Beacon Health System have been specifically trained to talk with these trauma victims. The hope is that even if they don't immediately take part, eventually they will.