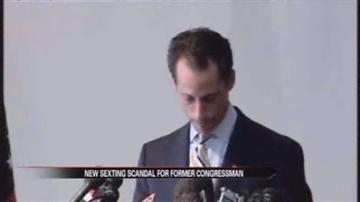 NEW YORK CITY -- Former Congressman Anthony Weiner is in trouble for being caught sexting again, but says he is not giving up on politics.

Weiner resigned from congress two years ago when he admitted to sending sexually explicit messages to women other than his wife.

New messages are surfacing right as he is running for mayor of New York City.

His wife is standing by him as he continues his campaign.

"I have been positive about this campaign. At the end of the day, people are more interested in challenges they face in their lives than the embarrassments of my past," said Weiner.

"I love him. I have forgiven him. I believe in him," said Weiner's wife Huma Abedin.

Several other mayoral candidates have already asked Weiner to withdraw from the race.

Before the new scandal broke, he was leading some of the polls.