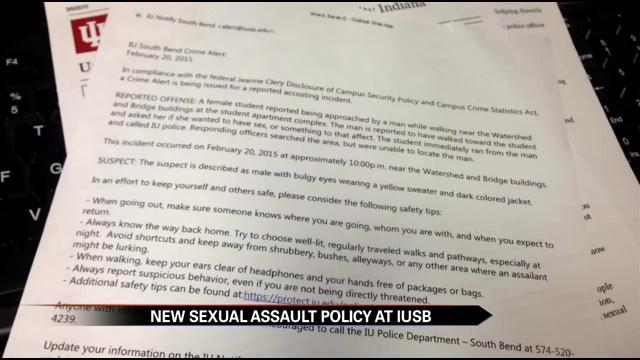 Indiana University is adopting new sexual assault policies on all their campuses.

The new policies urge students and victims to seek help after rape or sexual harassment.

It even outlines how they can go about making a report and the procedures for investigating these types of incidents.

But not all students think the new policies will protect them.

Sarah Graham, a freshman at IUSB, said “I don't really think it's going to help any to be honest. I mean I get scared walking from building to building and I don't think I should have that scare. They say they are going to do things and they never stick to it. The police stop patrolling the parking lots and stuff at night. I don't think it will make it any safer.”

ABC 57 News reached out to the Counseling Center and Police Department at IUSB for a comment on these new policies, as well as the reactions we received from students like Graham, but our phone calls were not returned.

But from doing some research, ABC 57 found a reported offense from February 20th where a female student reported being approached by a man who sexually harassed her.

Fortunately, the female student was able to run away from the scene.

One reason why students like Emily Kozinski, a senior at IUSB, comes prepared.

Emily Kozinski said “I carry around pepper spray. But I do know that with the security walking around I normally feel safe but I don't go out of my dorm like past dark unless I'm going straight to my car.”

The campus police at IUSB also have online resources available for students that outline how to stay safe on campus.