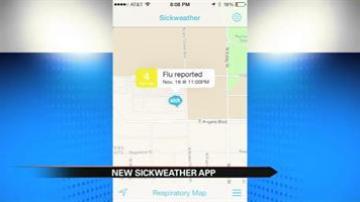 GRANGER, Ind. -- A newly released Smartphone app wants to warn people of sicknesses in their area. It is called Sickweather.

Just like weather and traffic radars, the new Sickweather app is tracking illnesses in your neighborhood and alerting you with one click on your phone.

“It’s to the advantage of the public to have something like that. Because if I knew the area had a certain number of flu cases I might avoid a restaurant in that area.”

You can also get alerted to individual illnesses as well, like allergies, common cold, and cough.

But the app gets its data from social media sites where people have complained about a particular illness, not from hospitals or doctors reports.

Doctor Matthew Teters says this app could be beneficial, but sometimes people incorrectly self diagnose.

nd unfortunately, that could make a lot of this application’s data incorrect.

The doctor says this app could be best suited to track illnesses in different regions as opposed to just intersections where an illness was reported.