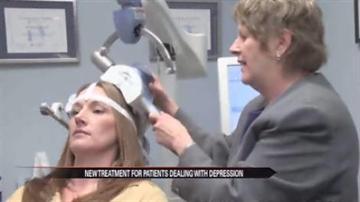 AUSTIN, Texas -- Millions of Americans suffering from depression turn to drugs to help ease the symptoms but now there is an unorthodox new treatment that is giving hope to some.

It is called Neurostar TMS or Transcranial Magnetic Stimulation.

A magnet is placed over the patient's forehead and sends a pulsed magnetic field, similar to an MRI into the brain.

Most patients need between 20 and 30 of the sessions.

"When that magnetic field hits the wet tissue of the brain it turns into a tiny, tiny current that targets only the areas affected by depression," said psychiatrist Marilyn Vache.

"At the end of the twelfth session I was Bonnie again," said patient Bonnie Smith.

The doctor says each session goes for about $500.