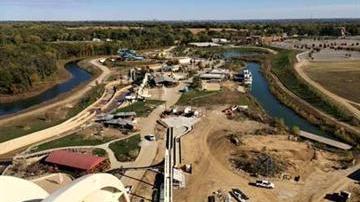 Kansas City, KS (KCTV) -- Officials with Guinness Book of World Records will measure Schlitterbahn's newest water coaster to determine whether it is truly the world's tallest.

Verruckt, which is German for insane, is expected to be a game changer for water parks.

The actual height of the water coaster has been a carefully guarded secret, with park officials only saying it's at least 17 stories tall and riders will have to climb 264 steps to the top before being flung down in four-person rafts.

Kansas Gov. Sam Brownback will attend the official ceremony when Guinness is expected to certify that the Kansas City area slide has bested one in Brazil that towers almost 164 feet in the sky.

The measurement is determined by where the rider starts at the top of the ride until when the ride comes to a stop.

No one has actually flown down the slide yet. The park is still testing the ride by sending down sand bags and crash dummies in rafts.

The plan is to terrify riders with a grand opening at the park on May 23.

"It's not 90 degrees, although when you stand on top of it or are looking down the structure, it does have the optical illusion, which is part of the fun of the attraction or the fear," Pitcher said. "People are going to get that lighter-than-weight feeling as they ascend down the ride."

Those screaming with their eyes closed tight will also endure a second five-story hill climb before another drop.

"It's got the longest climb of any water coaster too," Pitcher said. "You're going to descend down that and then you're blasted up the second hill. Nobody has ever tried that before with this steep of a drop."

He said it will feel like a roller coaster but riders will be on a water slide.

"We don't know the speeds yet because we are testing the speeds," he said, adding that adjustments will be made so when it opens, "the ride does exactly what it is suppose to do."

A water slide opening in 2016 in Florida is also being touted as a future world's taller water coaster.