NFL Commissioner Goodell: 'It's been a tough year' 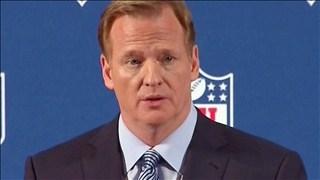 NFL Commissioner Roger Goodell acknowledged Friday that "it's been a tough year" for him and his league after months' worth of news about everything from allegedly abusive players to ongoing concerns about concussions to deflated footballs. But it was also one, he insisted, marked by significant progress on several fronts.

"We've all done a lot of soul-searching, starting with yours truly," Goodell said. "And we have taken action."

The commissioner made these remarks during his "state of the league," given each season on the eve of the Super Bowl. This Sunday's matchup is between the New England Patriots and Seattle Seahawks. The NFL is the most popular professional sport in the United States, which makes the spotlight on it that much brighter.

On Friday, Goodell touched on a number of subjects, from instant replay to extra points to a possible franchise in Los Angeles. But he couldn't get away from issues that have dogged his office -- chief among them how the NFL handles allegations of domestic violence by players.

Goodell said the NFL wasn't where it needed to be in August, when then-Baltimore Ravens running back Ray Rice became the center of controversy after video surfaced showing him hitting his then-fiancée. This case came on top of several others -- from child abuse accusations against Minnesota Vikings running back Adrian Peterson to an assault case against Carolina Panthers defensive star Greg Hardy -- that had some demanding that the commissioner resign.

He gave no indication Friday he would do any such thing, even after what he called "a year of ... humility and learning."

For the first time, the commissioner also addressed what's been dubbed Deflategate, which relates to the use of underinflated footballs in the first half of the New England Patriots' AFC Championship win over the Indianapolis Colts.

As information leaked out about the situation, some suggested strict punishments for New England -- from large fines to suspensions to kicking the team out of the Super Bowl. But the Patriots have fired back, with coach Bill Belichick denying wrongdoing and suggesting science could explain the air pressure issue and owner Bob Kraft suggesting the NFL may owe Belichick and Patriots quarterback Tom Brady an apology if its investigation finds no wrongdoing.

The commissioner made no apologies Friday for the league's handling of the case, saying, "This is my responsibility to protect the integrity of the game." He's tapped Ted Wells to lead an external investigation into the issue.

That investigation is focusing on two main questions, according to Goodell: "Why were some footballs used in the game that were not in compliance with the rules, and was this result of deliberate action?"

He added, "I want to emphasize -- we have made no judgments on these points. And we will not compromise the investigation by engaging in speculation."