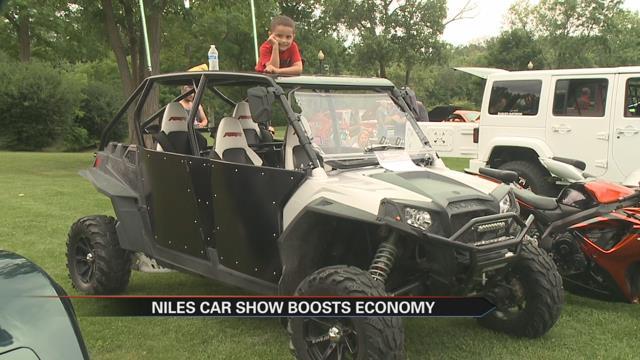 It's a series of car shows that run through out the summer every year.

But event organizers say this summer's show was almost canceled.

For five years, Main Street was the location for the festival.

But with bridge construction happening nearby, the Bring It Super Car Club decided to move this year's series in a park by the river.

That's a move local businesses say has made even more customers show up to shop.

"You got to give some food away to get some return on your investment," said Jim Morris, Owner of Jim's Smoking Cafe.

His investment is his restaurant.

Wednesday, his food was sold out of a small tent in the park but his restaurant is actually located inside Niles Wonderland Cinema only a few feet from the event.

But Morris hopes that will soon change because of events like this car show.

"I had heard from some of the local businesses that they bring in three and four times as much as they do through the week just on the Wednesday night," said Jerry Fry, Owner of Fry Rides & Fabrications.

Every Wednesday the Bring It Super Car Club shows off muscle cars like an old school Corvette and even some unique vehicles like a Coffin-mobile.

It's a tradition that requires a lot of helping hands.

"Putting on an event like this does require coordination and cooperation and mutual agreement and many different groups and individuals," said Marc Milhander, Director of Bring It Super Car Club.

Coordination and cooperation that takes a village, put on for a small city.