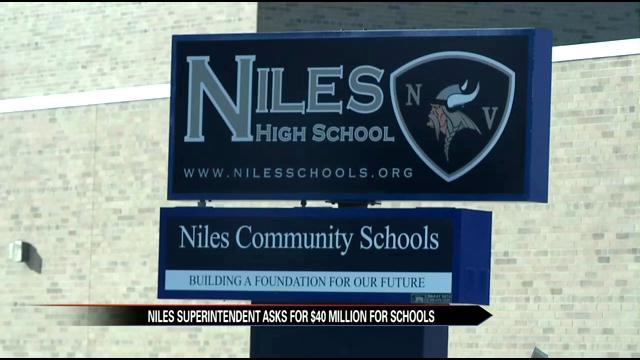 The Superintendent of Niles Community Schools is asking voters for $40 million in bonds to improve the district.

He held a meeting Monday night to explain what the bonds would cover.

The bond is split up into two parts.  The first proposal costs about $30 million and deals with infrastructure repairs like temperature control and better fire alarms.

The second proposal costs about $10 million and deals with more visually appealing changes such as furniture and power in classrooms.

In some classrooms, there is currently no air conditioning or effective heat.

Teachers and students alike complain of plumbing and other infrastructure issues.

Karen West has five children in the school district.

"For children to learn we need to manage the environment, they need a comfortable place. They need all of those things and we need money to do it," said West.

Even though the bond would take a few years to go into effect if it passes, West said she will still support the schools after her children have graduated.

The plans also include technological improvements throughout the district, including new phones, expanded wifi and interactive classrooms.