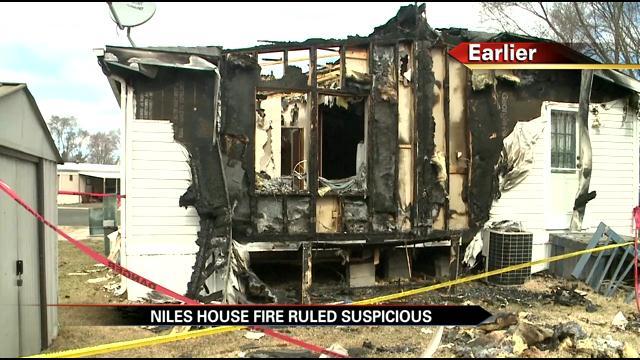 A family in Niles is left with questions after their home was destroyed in a fire two weeks ago. The Berrien County Sheriff's department cannot confirm whether the fire was arson or not but the homeowner wants answers.

Pamela Parker walks around reviewing the place she used to call home. She rummages through very few of her belongings that survived the fire the morning of March 12th.

“My favorite picture it did survive,” says Parker as she reads the inspiration message on the picture.

“I can do all things through Christ that strength me,” she reads aloud.

“I'm a firm believer God was with us that night,” continues Parker.

Two weeks ago flames and smoke ripped through the Parker's home at the Franklin Woods Mobile Home Park on 13th Street in Niles, leaving the family homeless.

“This is the only house I've ever live in that I can remember. We couldn't really take much stuff cause we are in a hotel,” says Parker's son Matthew Kelley.

The family of three has been staying at a hotel for two weeks while the Berrien County Sheriff's Department investigates. Lieutenant Biggart says the investigation is ongoing but it is suspicious when a fire starts outside of the home.

She looks back on everything she lost in a matter of hours.

“After being in here since 2003 and my beautiful home is… there is nothing left of it. I worked so hard trying to get it all nice and fixed up and it's just all gone, for what reason?” questions Parker.

Parker's son started a 'Go Fund Me" account to help the family as they look for a new home and start over. To donate to the Parker Family Fire Loss Fund click here.