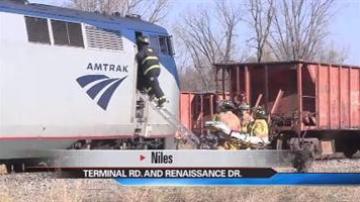 NILES, Mich. --  Emergency responders from four different fire departments came to help out the 169 passengers that were on the Amtrak train at the time of the derailment.

Niles firefighter Rory Iwaniuk said he couldn't believe his ears when he heard a train was derailed Sunday around 10:30 a.m.

"I've been doing this for 20 years and this is my first train derailment," said Niles firefighter Rory Iwaniuk.

The Niles fire crew quickly rushed to the accident on Terminal Road and Renaissance Drive.

Luckily the derailment happened right down the street.

It only took crews about five minutes to arrive. Iwaniuk said the location also made it easy for the firetrucks to get through

But once they did get in, they realized they had a lot of work ahead of them.

"Of course the train was full of people 169 passengers total," said Iwaniuk.

Iwaniuk and his crew set up shop. Firefighters quickly gave passengers colors based on the seriousness of their injuries.

"If you can walk and move you are green," said Iwaniuk.

Those green uninjured passengers were escorted to school buses and transported back to an Amtrak station, but seven others did not get the green pass.

"We called for school buses from Niles School system," said Iwaniuk. "We did have people that we put on backboards and stretchers and were transported to a nearby hospital."

None of the seven passengers who were transported to the hospital had life-threatening injuries.

All Amtrak trains are running on schedule as of Monday morning.