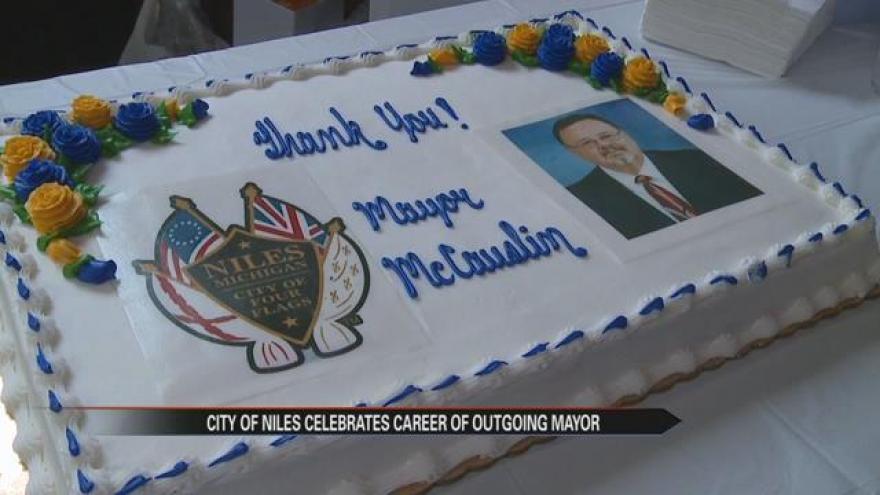 A celebration for the city’s longtime mayor was held at the Niles History Center on Wednesday night.

After 25 years of service to the Niles Community, Mayor Mike McCauslin won’t be running for reelection.

Mayor McCauslin served eight years on the city council and has been mayor for the last 17 years.

“Tonight is about starting to say goodbye. It’s been a fantastic experience but it’s time for somebody else to lead the community. One of the most important things I’ll take away from this position is the incredible people that I’ve met and that I’ve gotten the opportunity to work with,” said Mayor McCauslin.

“I’ve known Mike about 30 some years, we used to be neighbors. I remember him coming over and asking me what I thought about him running for Niles City Council. He’s done an amazing job for the city, for the people of Niles,” said Robert Harrison, President of Lake Michigan College.

Longtime assistant Diane Bass says it will be hard to replace Mayor McCauslin.

“I’m always going to measure everybody next to Mayor McCauslin like it or not,” said Bass.

“We have two very viable candidates running for mayor that I think will both be able to serve the community and serve it very well,” said Mayor McCauslin.

Mayor McCauslin says after leaving office, he will continue to work for Risk Management and Safety at Notre Dame.