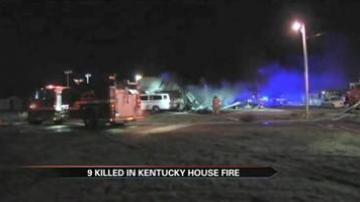 GREENVILLE, Ky. -- As many as nine family members were killed early Thursday morning in a house fire in rural Kentucky.

Two other members of the family were taken to the hospital for treatment.

Officials say the fire broke out around 2 a.m. and crews were still at the charred remains of the home four hours later.

Firefighters have removed six bodies from the home and the remaining three people are presumed dead.

"Basically what we're doing, is what we're doing what we can because inside the scene is still so hot, and so as far as recover it's going to take a while for our investigators to get in there and do that, or find a cause of what started the fire," said Kentucky State trooper Stu Recke.

They are still working to find out what caused the fire.