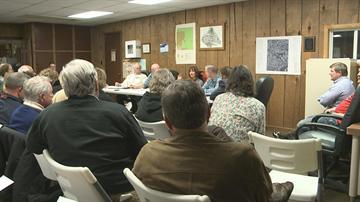 KEELER TOWNSHIP, Mich. – Sister Lakes residents filled the room at a meeting of the Keeler Township board Tuesday night to voice their opinions about the shut-down of Sister Lakes’ ambulance service which has been replaced by Pride Care Ambulance.  Residents made claims that Pride Care’s service is too slow, one man claimed it took the service 18-minutes to respond to a call at a neighbor’s home.  Another claim was made that the company often violates the contract which requires them to provide 24/7 coverage of Keeler Township.

“Considering the fact that they had an ambulance that was in the area staffed 24/7 365 that didn’t leave the area, we didn’t leave these people unprotected and now they’ve gone to this,” explained Sister Lakes Fire Chief Tony Lozada.  “I feel they’re being shortchanged.”

Board members revealed that they did have evidence provided by GPS units tracking Pride Care’s ambulance that shows the ambulance had left Keeler Township on multiple occasions.  The contract with Pride Care strictly requires round-the-clock coverage of the township.

With the township spending over $100,000 for Pride Care’s service many residents said they’re worried their money is being wasted and that they’re at risk if the township isn’t covered.  Though many residents demanded that Sister Lakes Ambulance be restored, board members pointed out that the money spent on Pride Care would not pay for Sister Lakes Ambulance and that lack of funding is what forced the township to shut-down the service.  Many were left disappointed that the board didn’t take firm action against Pride Care after it was revealed that board members believed they had violated their contract.

“I really didn’t know what to expect, I was aware the contract violations were going to be brought to light and I thought maybe the board would do a little bit more,” Chief Lozada explained.

Board members said they would be talking with Pride Care about the situation in the coming days.  They also asked for former members of Sister Lakes Ambulance to join the talks in hopes of possibly negotiating for Sister Lakes’ crews to join Pride Care’s service, but many former members at the meeting said such an agreement is unlikely given differing standards between fire department and private ambulance services.