No clear starting line up for ND O-line 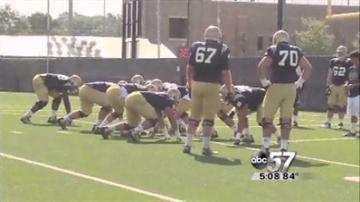 SOUTH BEND, Ind. -- Notre Dame Head Coach Brian Kelly spoke to reporters after Monday's practice. There are a few minor sprains and twists that are limiting practice time for some players. Junior Guard Conor Hanratty has a minor injury and hasn't been practicing and that's shaking up the O-line.

The O-line has been a bit of a question mark this season and so far there's no clear starting lineup.

While the left side of the line seems to be pretty much secured with Zack Martin coming back at left tackle and Chris Watt staying in at left guard.

The right side of the line is still up for the taking.

"Coach always says best five guys are going to be starting and if they think I'm the best Guard and that's going to be the best combination then I'm going to play it," said Senior Guard Christian Lombard.

Lombard has switched between right tackle and right guard.

Through pre-season he has stayed at guard but it's not necessarily where he'll end up.

"He's not built that he's just a tackle. He's thick trunked, he can get in there, move people and he's got good enough feet that he can play on the edge if required like he did last year at the tackle position," said Coach Kelly.

But it's possible that when Connor Hanratty comes back in, Lombard gets shifted to the outside, a position he's familiar with.

"Lot of close quarters, close combat from that perspective you got to be a lot quicker you know off the ball cause guys are right on top of you," said Lombard.

Taking Braxton Cave's spot at center will most likely be Nick Martin who seems to have edged out junior Matt Hegerty.