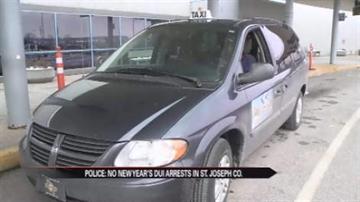 ST. JOSEPH COUNTY, Ind. -- The policy is - drink and drive and you’ll go straight to jail. But this year, not a single person in St. Joseph County, Indiana was arrested for DUI on New Year’s Eve or the following morning.

Mishawaka Police said this is the first time they know of that no one was booked for DUI on New Year’s Eve.

New Year Eve is usually busy for taxi drivers. Charles Flenoy of Eagle Cab says he drives dozens of intoxicated people home on the holidays, but this year New Year’s Eve was different.

"I can't give you a good reason why. Slower than usual,” said Flenoy.

But it wasn't just a slow night for him.

"It wasn't a very prosperous night as far as drunk driving,” said Lieutenant Tim Williams of the Mishawaka Police Department.

For the first time in St. Joe County history, no law enforcement agency arrested a driver for drinking and driving between 6 p.m. New Year’s Eve and 6 a.m. New Year’s Day.

That's nothing but good news.

"We've seen the end results of drinking and driving and we've had to tell family members that their loved ones are never coming home. To not have to do that on a holiday like this here, that's awesome,” said Williams.

Some taxi drivers, like Flenoy, discounted their prices. He made less money because of it New Year’s Eve, but says it was worth it if it made the roads safer.

"Many more people should do it. Be more charitable and concerned about one another. Too much selfishness,” said Flenoy.

Taxi drivers said last night's slow activity might be due to the fact that New Year’s fell on a Monday this year.