No injuries in explosion at wastewater treatment plant 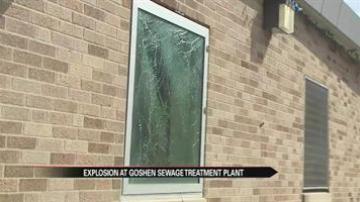 GOSHEN, Ind. -- There was an explosion at Goshen's wastewater treatment plan around 5 a.m. Monday. It happened about an hour before most employees were scheduled for work.

Jim Kerzeman, the superintendent of the wastewater treatment plant, says methane gas produced by sludge seeped over from the digester to the thickener building, ignited, then blew the walls out.

He says if anyone had been working in the offices at the time, they could have been killed.

The gas traveled through the sewer system underground to the building.

Kerzeman has worked in this business for over 33 years and he says it's the worst explosion of this type he's ever seen.

"Somebody could have died in that building, it was a pretty big blast. We had neighbors that felt it half a mile away from here," said Kerzeman. "It was big enough to shatter a safety glass - a one-inch plate window and to move the walls six inches from where they are."