No retrial for reverend in election fraud case 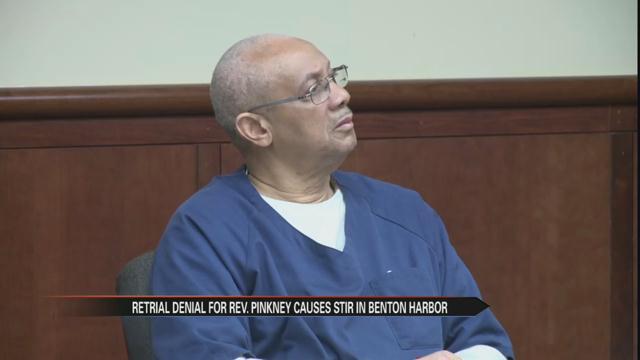 A reverend from Benton Harbor was denied a retrial on Tuesday and he was ordered to pay the mayor about $1,700 in restitution for an illegal mayoral recall.

Dozens of demonstrators came from across the country to support Reverend Edward Pinkney and his attorney's motion to have a new trial.

In December, Pinkney was sentenced for five counts of forgery for changing the dates on a petition to recall Benton Harbor Mayor James Hightower.

Demonstrators from all walks of life held a rally outside the Berrien County Court House on Tuesday.

One demonstrator said he was there because he was "tired of our black men getting locked up for things that they did not do.”

Inside the court room you could hear a pin drop as Reverend Pinkney's attorney argued for a retrial because they believe a juror was friends with the Berrien County Clerk, Sharon Tyler, who is involved in handling recall petitions.

Eventually Judge Shrock said the defense did not provide sufficient evidence that Tyler and the juror had a relationship that would affect the juror's decision to convict Pinkney.

Dr. Jill Stein sat in on the hearing and traveled over 900 miles to hear this decision.

Dr. Stein said, “There seem to be some urgent and very disturbing questions about this case particularly in light of what we are seeing around the country about court corruption in regards to the fact that black lives matter.”

Dr. Stein is seeking a 2016 Presidential bid from the Green Party and she said she's been following the election fraud case closely.

Dr. Stein said, “Truth to tell, this is an issue that goes way beyond Benton Harbor. Benton Harbor is really a poster child of economic disenfranchisement, of disinterment, and of corporate influence peddling. We see that in the courts, we see that in behavior of the mayor, Mayor Hightower who was subject to this recall campaign undertaken by Pinkney.”