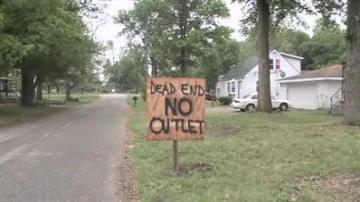 ELKHART, Ind. -- If it's not winter, it’s road construction season in Michiana. Construction on State Road 19 in Elkhart, between Beardsley and Lusher avenues, is causing a lot of confusion for drivers, homeowners and business owners.

"There are too many people driving way too fast turning down the road,” said homeowner Thomas Shirley.

He has lived in the neighborhood since 1973.

He and his wife had no idea road construction would be going on outside of his house for half the summer.

"I want to get it done, but I'm real scared and concerned about what they are doing to me,” said Shirley.

"They did not have any signs directing you where to go,” said neighbor Ryan Konrath.

The project has been going on for two weeks. And there are still no signs – so Konrath created his own.

"I said well I'm going to grab some spray paint and some wood at least so people would know you can't get out this way, let me turn around,” said Konrath.

He admits his sign isn't working out too well.

"There still are the people like maybe I can get through anyways,” said Konrath.

Plenty have kept on going and ended up in the cemetery.

Businesses are also putting up signs, but for different reasons.

Bruno's Pizza is traditionally closed on Mondays, but they put up some extensive signage to let their customers know that they are open the rest of the week and how exactly to get there.

Management at 7-Eleven and other businesses say they are feeling the pinch as well. They say drivers don't want to stop because they can't get in and out fast enough.

The project is expected to continue through the middle of July. Click here for more information on the SR 19 project

INDOT responded to our request for information about the project:

The closure of Indiana Avenue is required for the contractor to reconstruct the approaches to SR 19 and add improved drainage features.  It is expected to end in mid-July, weather permitting (it is a 50-day closure that started May 21).  The local traffic detour is Franklin Avenue to Shore Avenue to Indiana Avenue.

The closure of Indiana Avenue extends to west of Jones street.  In order to build the intersection at Indiana, at times, it will require restrictions at Jones Street, which stubs into Indiana near this intersection.  The contractor is required to maintain some sort of access for homeowners and business owners.  Additionally the contractor has been talking to homeowners and business owners to apprise them of the situation and work with them, around their schedules.  Ultimately, there were barricades up, but homeowners were able to traverse this street.  There are restrictions on Jones, but it is not closed.  It is traversable at Indiana, one vehicle at a time.

Later this summer, Indiana Avenue on the east side of SR 19 will close -- again to reconstruct the approaches to SR 19 and add improved drainage.  This is expected to be a 45-day closure.  It is true that the contract called for the closure of Pennsylvania Avenue, but the contractor has worked to keep it open as much as possible to help residents in the area.

The SR 19 reconstruction project consists of complete pavement replacement from Lusher Avenue to Beardsley Avenue to accommodate a 5-lane concrete roadway with a bi-directional turn lane. This will match the portions of SR 19 north of Beardsley Avenue and south of Lusher Avenue.  The project will also include rehabilitation of the bridge over the St. Joseph River; installation of sidewalks; curb and gutter; ADA ramps; storm sewer system; new traffic signals; and pedestrian crosswalks with pushbuttons at Franklin Street, Indiana Avenue, Lexington Avenue, and Bypass Road.  Work on the section from the St. Joseph River north to Beardsley was completed in 2012. The current focus is SR 19 from the St. Joseph River south to Franklin Street. Next year the focus will be SR 19 from Franklin Street south to Lusher Avenue.