No same sex couples have applied for licenses in Marshall Co. 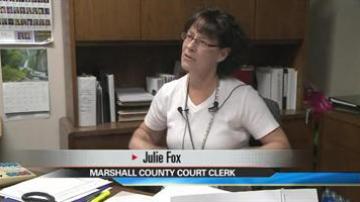 MARSHALL COUNTY, Ind. -- On the first full day same-sex couples can get marriage licenses in Indiana, couples were expected to flock to their county clerk's office to make it official. In at least one northern Indiana county, no one has asked for one.

Marshall County Clerk Julie Fox said Thursday that although they have received a few phone calls about the issue, no same sex couples have applied for a license yet.

A judge struck down Indiana's ban on gay marriage on Wednesday. In St. Joseph and Elkhart counties, dozens of couples have gotten marriage licenses.

Fox doesn't know why no same-sex couples have come into her office, but she says they are ready if anyone does.

He believes in the traditional definition of a marriage, one man and one woman, but says he will follow the rule of law.

"Certainly comply with the Court's order - pending that appeal. We're going through the process of evaluating how we do that in an appropriate way and an orderly way as we speak," said Pence.

If a court grants the Attorney General's request for a stay until the appeal is decided, it's unclear what will happen to couples who have already been married or issued a marriage license.