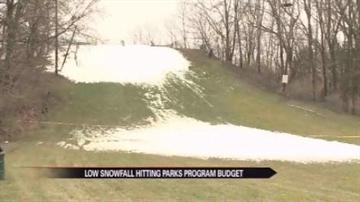 ST. JOSEPH COUNTY, Ind. -- The lack of serious snowfall this winter is keeping the tubes and skis locked up at St Joseph County parks and that could be a problem next year.

The Saint Joseph County Parks Department says it's too late, no blizzard can help them now. Revenues are down and some programs may be on the chopping block as a result.

But now all that's left is the bottom of a sad-looking snow man.

“There has been no season for us because we have not been able to open. So we are still ready and waiting for the snow to cooperate,” said Brooke Artley, Leisure Services Manager, St. Joseph County Parks.

Thousands of $3 tube rentals a day adds up.

The holiday period historically brings in the most visitors, but so far they've earned a fat goose egg.

"We could see easily a thousand people at each of our two locations and once we've left the holiday period it's still quite common for us to have several hundred people on each day of a weekend,” said Artley.

Artley said these winter sports bring in thousands of dollars a season.

That money covers the costs of programs for underprivileged kids and those who normally couldn't afford to take part in the fun.

"Low income or no income school programming that we might be doing at discounts and other programs that we're doing for underprivileged youth,” said Artley.

No snow means no funding for next year unless they receive scholarships and grants from outside sources.

The finish push is citizen donors.

"And then certainly we have to look at the bottom line tighter and decide whether or not some programs will be able to be offered,” said Artley.

Artley said even though there's no snow, there's still about 400 acres of space to enjoy a day at the park getting some exercise walking the dog or tire out the kids at the playground.