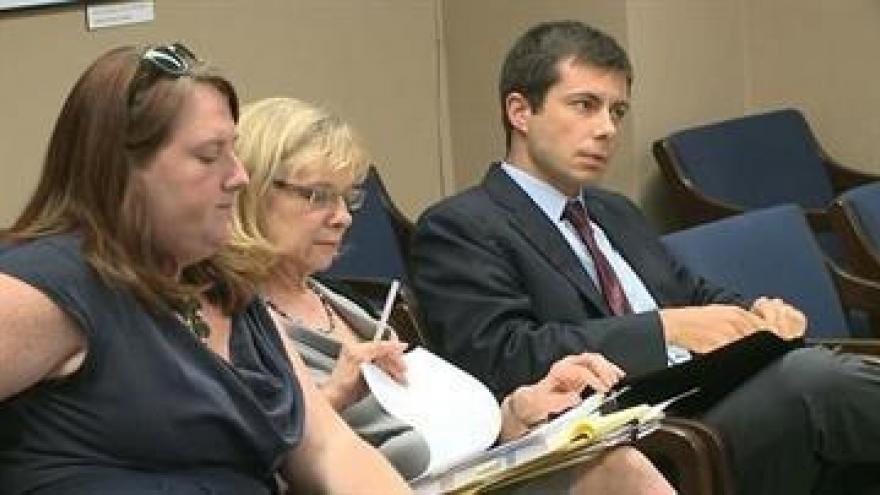 SOUTH BEND, Ind. – Mayor Pete Buttigieg was not swayed by the attorney hired by the Common Council. A private meeting with all parties, including the interim city attorney lasted more than an hour; the Mayor and all of his team left before it was over because Buttigieg had a speaking engagement in Granger.

The purpose of the meeting was to put the Mayor and the hired attorney, E. Spencer Walton, Jr.; a well respected attorney and partner at May Oberfell Lorber; in a room together so that Walton could explain to Buttigieg why it would it is legal for him to listen to recorded conversations found at the police department. According to Walton it is also legal for him to release them.

While they could not provide details on what was specifically discussed in the meeting, several council members commented on the feel of the discussion, and the level of preparedness, if not understanding, the attorney’s showed during the discussion.

It was like kindergarten all over again, according to one member.

Another said, Interim City Attorney, Aladean DeRose, clearly was outmatched by Walton in her understanding of the law.

A third mentioned, there were low expectations this meeting would result in the tapes being turned over; that it was just another step along the way.

This last comment seems to jive with the sentiment Buttigieg put forth himself. “We are going to continue to try and let this play out through the legal process so that everyone does everything by the book,” said Buttigieg.

Buttigieg has done everything he can to keep the tapes from being played for the public.

He has claimed that his legal advisors tell him, releasing the tapes would be a violation of the wiretap act, because they were recorded illegally.

Those advisors, again, are Interim City Attorney Aladean DeRose and Rich Hill, a special counsel paid for by Buttigieg himself.

According to Walton, that line of defense is flawed because the assumption that the recordings were made illegally doesn’t hold water.

Using case law, Walton can prove the recordings were legally made and fall into an exception within the wiretap act itself.

Further, if the recordings fall within the exception they are exempt from the entire act, according to Walton.

Walton’s primary, but not only, case law for this is the Amati v. Woodstock case we have been telling you about for months now.

In it, a federal judge ruled that if the police made the recordings in the normal course of business than they are an exception to the wiretap act; and he made it explicitly clear that it does not matter if they are private conversations.

The normal course of business is defined as the recording of phone calls for the purpose of have a record of complaints and tips, which every police department in the country does.

We have reported that the line that was recorded was originally set up years ago to record exactly those things: tips and complaints.

Meanwhile, Buttigieg has also used plausible deniability to distance himself from having to turn the tapes over, even if a court does order them released.

The mayor on several occasions has used the phrase, “I don’t have them,” or has reminded the media he has sent them to the Department of Justice.

What some find hard to understand, or believe, is that Buttigieg would send all 13 cassette tapes to the Department of Justice especially since of those 13 tapes: 5 are the original recordings, 5 are the copies of the original recordings, and 3 are copies of some of the copies; as was enumerated by the U-S Attorney’s Office in a letter to the Mayor’s Office when the tapes were returned.

Why he would be compelled to send all 13 tapes; including copies of copies, to the Department of Justice is something we would like to ask the mayor.

Regardless, the hard copies of the recordings are just that, hard copies. The digital versions of all of the conversations are still thought to be located on the server that recorded them at the police department.

That’s where they were as of April 10, the day Karen DePaepe was fired by the mayor. She was the Director of Communications, and custodian of the records, at the Police Department.

According to DePaepe, it would take a court order to legally destroy the contents of that server, prior to the end of a three year holding period.

When asked if those recordings were still available, Buttigieg said, “I don’t understand all the technical details, but it is certainly possible they exist in another form.”

Why the mayor is not an expert on every aspect of this issue after more than 130 days (just north of 4 months), is another question we would like to ask the mayor; especially given the fact that the City is facing seven potential lawsuits tied to this situation.

The mayor has consistently shown that he has not given this issue his full and undivided attention.

An hour after he left the County-City building to attend his speaking engagement in Granger, more than 100 people showed up to demonstrate in front of the building that holds his office.

They demonstrate because they have lost faith that Commander Tim Corbett and Lt. David Wells of Metro Homicide are capable of doing an impartial job; Karen DePaepe through her attorney has confirmed that Corbett is one of several individuals heard on the tapes which contain, in her words, unethical, racial and possibly criminal content.

Wells is one of five people, including Corbett who may end up trying to sue the City, claiming he may be on the tapes and is a victim of wiretapping; he is also found in court documents to have mouthed words at the deceased man during testimony he was giving in defense of someone on trial for murder.

Ultimately, the buck stops at Buttigieg. He has claimed that he wants to know what is on the tapes and that he needed a legal reason to listen to and release the tapes.

Walton provided him with the reason he asked for, Wednesday; and backed it up with case law.

In response Buttigieg dismissed the man’s findings and insinuated the council has no interest in the legality of releasing the tapes. “They have been looking for a way to make it legal to release the tapes,” said Buttigieg.

Some counter that Buttigieg has been looking for a way to bury them from public view permanently.

Regardless, the inevitable step is litigation.

Prior to that, however, Walton is giving the City a chance to prove him wrong by providing him with information or case law that contradicts his findings.

This alone tells us, DeRose, who had more than a week to prepare to rebut Walton’s opinion, either did not or did so poorly she could not convince the Common Council their hired attorney was wrong.

Whichever it was, we will not know for sure; either way you do not give someone a chance to prove their case if they have already done it once.

Luckily for taxpayers, this charade will not last long. “This has just gone on way to long and it needs to have closure I wouldn’t want to wait much past next week before something happens,” said Walton.

That something is likely to be a subpoena from the council to the mayor demanding the tapes. “The quickest way to do it, is for us to give the mayor a subpoena, he decline to give us the tapes and then we go straight into and brief the issues there,” said Walton.

State law gives the council subpoena power, and once submitted Buttigieg will have about 30 days to decide if he will acquiesce or deny the subpoena.

Which leaves us with a final set of questions; will Buttigieg deny the subpoena right away, or will he drag out the process by waiting the full 30 days before denying it?

Failure to deny the subpoena immediately would certainly draw questions like: why would the mayor, who has said he wants to know if anything unethical or illegal are on the tapes, delay finding out if they were releasable.

Seems like a question we could ask now; why the dog and pony show? Why not just tell the Council to submit the subpoena, if you are not going to release the tapes?