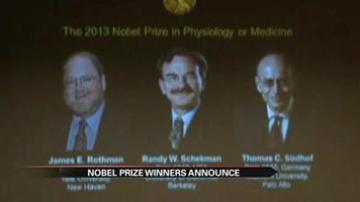 STOCKHOLM, Sweden. -- The first winners of the annual Nobel Prizes were announced for 2013.

The Nobel Prize in Physiology or Medicine was awarded to James Rothman, Randy Schekman, and Thomas C. Südhof.

Their research solved the mystery of how cells organize their transport system.

Schekman is UC Berkeley's 22nd faculty member to win a Nobel Prize and he says he was in shock when he got the call.

"These were things that I couldn't have imagined when I started and indeed never really worked on myself but happy to contribute in some small way in making that possible. So, this is really sort of the value of basic science," said Schekman.

Other winners will be announced later this week and next week.