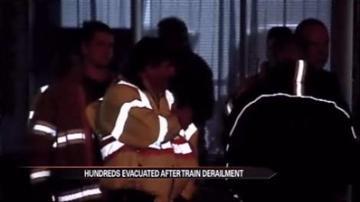 Four hundred people had to be evacuated.

Ten of the cars overturned and one of them was full of ammonia.

"HAZMAT has deemed there is no leak at this time; however, CSX wants to go ahead, due to the way the tanker is positioned they want to off load the ammonia which is going to be a time consuming process," said Captain Rodney Hester, Bladen County Sheriff's Office.

Hester says the car with the ammonia did not leak, but the process of moving it will take awhile.