North Korea says it can make new bomb in volume 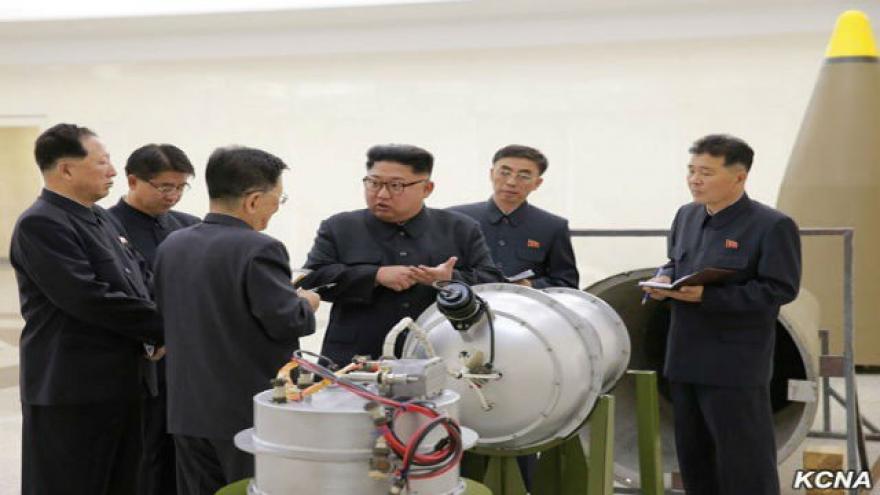 North Korea\'s regime has \"succeeded in making a more developed nuke,\" according to state news agency KCNA. During a visit to the country\'s Nuclear Weapons Institute \"he watched an H-bomb to be loaded into new ICBM,\" KCNA added. Photo courtesy KCNA

(CNN) -- Hours before North Korea announced it had tested a hydrogen bomb, its state-run news agency had a stark message for the world: We've developed a more powerful nuclear weapon and we can make as many of them as we want.

During a visit to the country's Nuclear Weapons Institute, Kim "watched an H-bomb to be loaded into new ICBM (intercontinental ballistic missile)," it said.

Melissa Hanham, a senior research associate at the James Martin Center for Nonproliferation Studies, said it was not possible to tell if the device shown in the series of pictures was the one that was tested Sunday.

"Just because they showed us that sort-of peanut-shaped object earlier, that doesn't necessarily mean that's actually what they exploded. And there's really no way for us to know whether their thermonuclear device would be small enough (to fit on top of a missile) ... that's still out until they actually test one on a missile," Hanham said.

Analysts have been uncertain about the ability of Pyongyang to mount a warhead on a ballistic missile and get that warhead to survive the tremendous heat generated on the missile's re-entry into the Earth's atmosphere.

But North Korea boasted about its nuclear missile program in Sunday's report, saying it has the know-how and materials to make as many weapons as it wants.

"All components of the H-bomb were 100 percent homemade and all the processes ranging from the production of weapons-grade nuclear materials to precision processing of components and their assembling were indigenously developed, thus enabling the country to produce powerful nuclear weapons as many as it wants," the report said.

It also said its hydrogen bomb was capable of devastating attacks on electrical grids.

"The H-bomb, the explosive power of which is adjustable from tens kiloton to hundreds kiloton, is a multi-functional thermonuclear nuke with great destructive power which can be detonated even at high altitudes for super-powerful EMP (electromagnetic pulse) attack according to strategic goals," KCNA reported in English.

Electromagnetic pulse is an intense wave of electrical energy generated by the detonation of a nuclear weapon.

"Nuclear EMP has the demonstrated potential to disrupt, damage, or destroy a wide variety of electrical and electronic equipment," according to the US Department of Energy.

EMP waves can disable all sorts of electrical devices, but their biggest threat is to the electrical grid and long-haul communications, a previously published Energy Department report said. One blast could knock out power and communications over hundreds or even thousands of kilometers, the report said.

North Korea has launched two missiles this year that demonstrated intercontinental capabilities, according to analysts. A launch on July 28 showed a missile that North Korea claimed could reach any part of the United States, though analysts said it might fall a bit short of New York, Washington and other East Coast cities.

Sunday's KCNA report on the new nuclear capability follows a week of escalating tensions on the Korean Peninsula.

Tuesday, Pyongyang launched an intermediate-range missile, identified by the North Koreans as the Hwasong-12, over Japan.

North Korean state media claimed a day later that the missile launch was a prelude to more military operations directed at the US island of Guam in the Pacific.

US President Donald Trump warned after the Tuesday launch that "all options are on the table" concerning North Korea's nuclear and missile program.

"This regime has signaled its contempt for its neighbors, for all members of the United Nations, and for minimum standards of acceptable international behavior," Trump said.

"Threatening and destabilizing actions only increase the North Korean regime's isolation in the region and among all nations of the world. All options are on the table."

Thursday, the US military sent its most-advanced fighter jets, Marine Corps F-35Bs, in a flyover of the Korean Peninsula along with US B-1 bombers and South Korean fighter jets.

In a statement, US Pacific Command said the flyover was a "direct response to North Korea's intermediate range ballistic missile launch."

North Korea called the flyover a "wild military act" by enemies flustered by the progress Pyongyang has made in its missile program.

Saturday, the US and South Korea announced they have agreed "in principle" to revise a bilateral treaty that limits the weight and range of the South's ballistic missiles.

The move could give South Korea more independence from the United States to react to the threat from North Korea, analysts say.

North Korea has been test-firing missiles at a rapid pace all year. With each launch, experts say Pyongyang can further refine and perfect its missile technology.