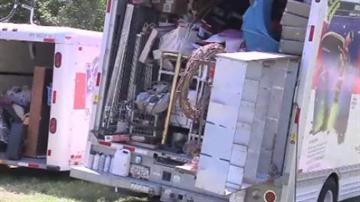 Residents up and down Washington Street in North Liberty said they are afraid of their neighbor, a man who has been labeled as a chronic hoarder, who became violent with law enforcement Friday afternoon.

The man, Michael Goble, has been difficult to live near for more than two years now, according to residents in the neighborhood.

They told us they are sick and tired of the situation and they hope today will mark the end of a long struggle.

Police Chief Mike Sawdon said he and town employees arrived at Goble's home around one p.m. Friday because he hadn't followed a court order issued in late June asking him to clean up his property.

Although Goble started cleaning, officers said there was still junk everywhere Friday. The deadline for him to clean up was July 10.

After officers arrived, Goble became aggressive and violent, and he tried to pull a table out of a town employee's hands. When an officer tried to place him under arrest, Goble resisted and hit the officer in the stomach.

Chief Sawdon said Goble was in custody at the St. Joseph County Jail. He was released sometime after 5 p.m. and returned to his home.