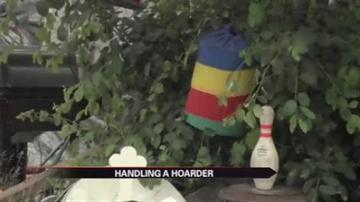 NORTH LIBERTY, Ind.---James Vanoverberghe first met his new next-door neighbor Michael Goble accidentally. He tried to trim the weeds and ended up with police at his door.

"I was trying to keep the weeds down and he told the chief of police that it wasn't weeds it was food and he started eating it," said Vanoverberghe, frustrated next-door neighbor.

"It's not an issue of accumulation- I'm just like everybody else," said Goble, renter.  His neighbors call it hoarding, he describes it as excessive gift receiving.

After neighbors filed many nuisance complaints, a judge gave him thirty days to remove all items from his yard. The box truck, bicycles, moped and wagon could stay.

"The thirty days is over," said Kim Vanoverberghe, frustrated next-door neighbor. "And we have not seen any sign of anybody doing anything."

If anything, neighbors now say the collection's growing.

"Come trash day in town, he drives around town on his bike with a wagon and goes and digs in people's trashes and dumpsters and hauls it back here with no respect," said James Vanoverberghe.

The city attorney John Peddycord is dragging around all of Goble's appeal paperwork.

"Unfortunately we have to go through these steps and he's very litigious," said Peddycord.

Peddycord assured upset neighbors that within the next two weeks the judge may likely hold Goble in contempt of court.