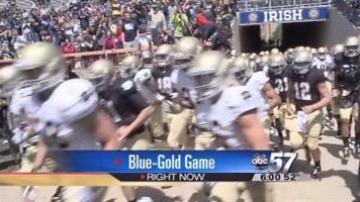 The Blue and Gold Game took place this weekend, and fans came in droves for the unofficial kickoff of the college football season. The biggest headline coming out of today's game is turnovers.

The defense had six big turnovers all game including an interception from Rees and Hendrix, and two big fumbles by Atkinson.

Coach Kelly stressed protecting the ball all Spring, but that wasn't the case at this weekends game. He said they need to pay more attention to detail.

"Those are the kids we've got, can't trade them, but we've got to get them better.  So they know that, we know that, and it's a matter of attention to detail for all of those kids" said Kelly.

Kelly's has some time to get the team back on track, the first regular season game is not until September 1st against Navy.

And Although the regular season is months away, fans were still excited to watch the Irish play, and way in on the big quarterback battle.

"I like Rees, I like his accuracy, but I will have to wait and see how it goes. After that, I might have to reevaluate my evaluation" said alumnus and former NFL player Mark Green.

We talked to fans who came all the way from Canada to Ohio to see some new faces and remember some old ones.

"Kind of makes me awestruck. I don't know how to describe it. It's amazing" said Beareon.

"Notre Dame is kind of our football team, so we came down last year for our first game. It was such an amazing opportunity, and anytime to get back is incredible said Ryan Yantz who came from Ontario Canada with his family.

For Corey Beareon, today's game was a very special birthday present from his girlfriend Samantha. She says Notre Dame football brought them together.

"He's a huge Notre Dame fan, and that's how we met. I had a Notre Dame book-bag and he saw it and that sparked his interest.

As for the Yantz family, they said they would made the trip from Canada to Irish County every chance they can get.

"It's worth every hour on the road coming yes" said Yantz.

And so the countdown to September begins The Irish will kick off the 2012 season in Dublin, Ireland against Navy on September 1st. They will host Purdue the following weekend at Notre Dame Stadium.