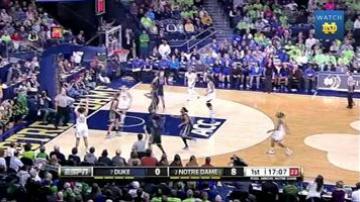 The Fighting Irish got off to a strong start in another match up against the Blue Devils.

The team saw a 20 point-lead against Duke in the first half.

Senior Guard Kayla McBride’s 31 points, in the 37 minutes she was on the court, was the talk of the game.

“I would pick her number one in the draft if I was coaching,” she said.

Former Notre Dame Women’s Basketball player Skylar Diggins, who made sure not to miss this match up, tweeted this about McBride: “K-Mac might get 30 today. Best player in the country. Maybe I’m a little biased, but whatevs. Go Irish!”

“I agree. I agree. I don’t think there’s any question. She’s certainly the best player in the ACC. And I think Alyssa Thomas is an excellent player too. But I think when a team wins the league and has the best player. I think you gotta see that,” Coach McGraw explained.

“We had a lot of energy. You could feel it in the locker room before the game. We came out. We were hitting shots, we were getting shots on defense, we were getting transitions, doing the things that we were doing. And I think we were just having fun,” said Kayla McBride.

But the game wasn’t a blowout.

And the team lost a little momentum in the second half.

“Scoring became a problem, we missed some shots. Our lining was a little bit different and I think we got out of our rhythm,” said McGraw.

The Fighting Irish are ranked number 2 in the ACC conference and head to the ACC tournament in March.