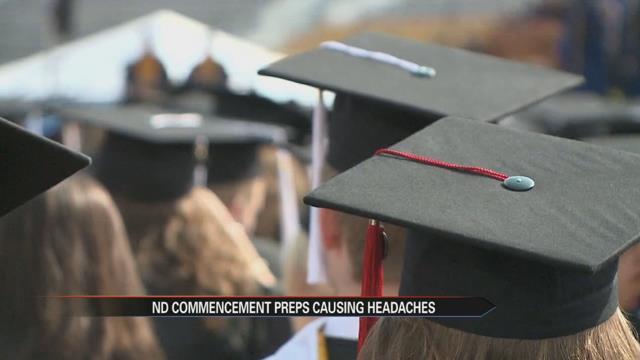 The recipients of Notre Dame’s Laetare Medal might overshadow commencement, with heightened security in place and protests planned.

“If people are patient and take their time, everything should work out fine,” University of Notre Dame Spokesman Dennis Brown said.

Commencement weekend at Notre Dame brings with it the usual warnings and heads up.

“I would say if you’re not coming to commencement, it would be good to avoid Angela [Blvd.] and Edison [Rd.] and the area south of campus, because I think that’s where most of the traffic will be,” Brown said.

But this year’s ceremony may also bring with it some unusual events.

“Should something arise, our security and police are available,” Brown said.

They are available for possible protests in response to the school’s awarding Vice President Joe Biden and former House Speaker John Boehner with its prestigious Catholic honor, the Laetare Medal.

Some students have opposing views of this year’s recipients.

“I’d rather just not be a part of [commencement] and celebrate on my own,” Notre Dame Senior Alexandra DeSanctis said.

DeSanctis will not attend her graduation ceremony because Biden and Boehner are receiving the medal.

She had joined dozens of students in mid-April at a prayer service where they protested the decision.

“Graduation is really supposed to be about the students,” DeSanctis said. “And I think by giving this award to people who are very contentious and controversial, they’ve taken the focus away in a way that is unfair to us and to our families, who have, obviously, worked very hard to get us through college.”

But students like King are okay with this year’s recipients.

“Even though I may disagree with both of them on some issues, I’m still supportive of the university’s decision,” King said.

He agrees with the university’s reasoning for choosing the vice president and the former house speaker.

“We aren’t awarding them the Laetare Medal for any particular political position they have, but instead, for their ability, through many, many years, to work hand-in-hand with their opponents on the other side of the aisle,” Brown said.

And in response to students skipping graduation because of the medal, Brown said: ‘I think anybody, whatever an issue might be, should follow their heart and follow their conscience and if that’s the way somebody feels, then we certainly understand it.”

There are also groups planning to protest that are not affiliated with Notre Dame.

Shawn Sullivan is the founder and director of Apostolate at the Life Center in South Bend.

As a pro-life advocate, he said he is strongly against Vice President Biden receiving the Laetare Medal.

“The hot button issues of the day are abortion, gay marriage, restrictions on religious liberty,” Sullivan said. “And unfortunately, Vice President Biden stands for all of those; so [Notre Dame] couldn’t have picked a worse person to bring into the fold for a Laetare award.”

Sullivan said he expects hundreds of pro-life advocates to join him in protesting at Notre Dame Sunday morning.

Brown said the school’s police force, as well as South Bend Police, is prepared to handle any demonstrations.

For students attending commencement, Brown said it’s important they arrive promptly at 7 a.m. Sunday morning, when gates open, because there will be security checkpoints.

Brown also encouraged attendees to check out this list of prohibited items that cannot be brought to graduation.