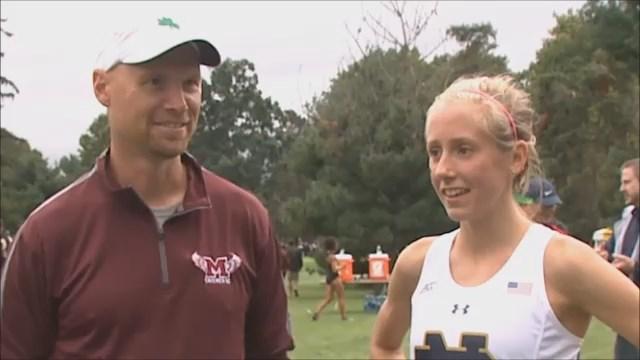 As the Indiana Bicentennial continues, one Notre Dame student athlete has been given the torchbearer honor by a local committee Monday.

Anna Rohrer, a sophomore and decorated distance runner at Notre Dame was one of three people selected in representing Notre Dame in the torch relay on Saturday.

“I feel honored that my community views me as someone who has had a positive impact. Being chosen as a torchbearer makes me want to do as much as I can to make my community the best place it can be,” said Rohrer.

Rohrer is a Mishawaka native and was Mishawaka High School’s Salutatorian in 2015.

According to ND, she served on the South Bend Youth Leadership Council and The Mishawaka Youth Advisory Council.

Rohrer was also a student D.A.R.E. ambassador and a recipient of the Mishawka Business Association Outstanding Citizen Award.

Notre Dame Associate Head Coach Matt Sparks commended Rohrer’s community involvement, "Anna takes great pride in being from St. Joseph County and from Indiana. She truly enjoys sharing her success with the people of Mishawaka and the opportunity to carry the torch is another way for her to connect with her community and the state."

According to the university, Rohrer was named the USTFCCCA Cross Country National Athlete of the week Monday – the same day she was named a torchbearer.

Sources say she collected her second first place finish on Friday in the Joe Piane Notre Dame Invitational, with a time of 16:11.7. Her time set an Irish personal best and became the second best finish in the 30-year history of the race.

Her performance prompted the ACC to name her the Cross Country Performer of the Week on Tuesday. However, the runner remained humble about her new title.

“It’s an honor to be named player of the week, but honestly, I’m trying to put it aside because I realize that it is a long season and my success this past weekend will not be important come November. It’s exciting, but I need to remember what the long-term goal is,” said Rohrer.

The university says Rohrer will be joined by Notre Dame President, Rev. John Jenkins, and three others in representing the area.

According to sources, the 3,200-mile torch relay began in Corydon, Indiana on September 9th and will pass through all 92 counties of the state before ending on statehouse grounds October 15th in Indianapolis.

The torch will arrive on Notre Dame’s campus at noon Saturday.