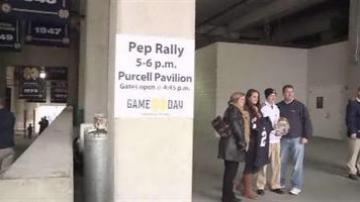 Friday night, fans of the Fighting Irish gathered for a football rally at the Purcell Pavilion. The team could be heading for another historic weekend.

If Notre Dame wins Saturday, they would be 9-0 for the first time in almost two decades.

All season, the team has been focusing on each game, one game at a time, instead of the big picture.

But their fans are beginning to see the light.

"You know you have your doubts when they first start winning that something is going to go wrong because that's what's happened the last couple of years. But watching the defense, I think everybody realizes this is a real football team,” said Tom White.

Like many blue and gold supporters, White is a self proclaimed lifelong Irish fan, but it’s his first trip to Notre Dame.

"We passed through one time, but my wife told me we had to keep on traveling so we didn't stop,” said White.

It may not be as busy as some of the season's bigger matchups, but the stakes are just as high.

"I think the pressure is a little bit higher because this isn't exactly a tougher team, but the stakes are higher because we do have that 9 and 0 record kind of over our heads so we're looking forward to that,” said Madelynn Green, sophomore at Notre Dame.

The Irish haven't been 9 and 0 since 1993. Just to put that put that in perspective, most Notre Dame freshman and even some of the sophomores weren't born yet.

"You grow up listening to all this Notre Dame lore of just all the history and then when we're here its finally happening again and it's just an indescribable feeling,” said sophomore Ryan Griffin.

The Panthers have won 2 of the last 3 games at Notre Dame Stadium and the last time Pitt played a top 4 team, they were 4 and 7 and upset West Virginia in Morgantown.