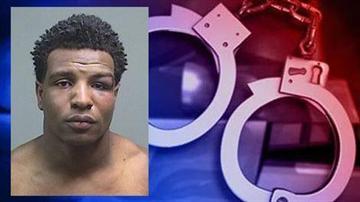 AUSTINTOWN, Ohio -- Notre Dame football player William Mahone, 20, was arrested in Austintown, Ohio late Saturday night after police responded to reports of a fight in the 4500 block of Rita Avenue.

When the officer arrived, there were approximately 20 people in the street.

Witnesses pointed the officer to a driveway nearby. The officer learned a man, later identified as William Mahone, was head butting and punching vehicles and was trying to fight with several people.

The officer made contact with Mahone who was being restrained by another person in an attempt to get him to calm down. He observed Mahone appeared to be intoxicated.

The officer asked Mahone to calm down, but he broke free from the man restraining him.

When Mahone approached the officer, the officer pointed his taser at Mahone and told him to get on the ground.

The officer then took Mahone to the ground and got a hold of his left hand. Mahone refused to give his right hand and a bystander assisted the officer and Mahone was handcuffed, according to reports.

Several officers arrived to assist. Mahone was asked to get to his feet, but he refused, reports said.

One of the officers got Mahone to his feet and began taking him to the patrol car.

Mahone then allegedly began to scream and shout and attempted to pull away, whipped his head back and struck the officer in the left side of the forehead, reports said.

Mahone was taken to the ground where he allegedly tried to kick officers.

At that point, the officer shot Mahone with the taser.

Once Mahone calmed down he was taken to one of the police cruisers. En route he continued to shout "Take these cuffs off and I will kill all of you!"

He was then placed in the back seat of the police cruiser.

Once inside he began kicking at the right rear window of the police cruiser.

Mahone was again shot with the taser.

While officers continued their investigation, Mahone allegedly began spitting on the windows and seats of the cruiser. Officers then applied a spit net over Mahone's head, reports said.

The officer took Mahone to the hospital for treatment of a cut over his left eye which police say happened before officers arrived.

When he was told he was going to the hospital, Mahone allegedly replied, "Good, get me out of these cuffs and I'll kill you and all them [Expletive deleted] there!"

Because of his alleged violent behavior, Mahone was taken directly to the Mahoning County Justice Center. On the way, Mahone allegedly said, "Bro when I get out I got a Glock 9 for your [Expletive deleted]."

Once at the Justice Center, he was seen by medical staff and they refused to admit him. He was then transported to the hospital.

Police said at the ER he continued to scream profanities at officers and hospital staff, reports said.

Once he was released from the hospital, he was taken to the justice center on charges of disorderly conduct, resisting arrest, assault on a police officer, intimidation and vandalism.

Michael Bertsch, the Director of Football Media Relations with the University of Notre Dame issued this statement:

The University is aware of this incident and is confident that it will be handled in a prompt and professional manner through the criminal justice system. Internal discipline is handled privately, in accord with our own policies and federal law.